This is our family

This is our family, and these are just some of our 9,124 relatives. Our earliest known ancestor is Harold Klack in the year 800 CE — although there is an unproven link some time around A.D. 1100. Famous individuals include Randall Williams ’The King of Showmen‘, whose 1890‘s bioscope show was the first time that moving pictures had been shown to the British public. For six generations, the Williams family travelled a fairground around the north-west of England, and are connected to all the famous fairground and circus families. 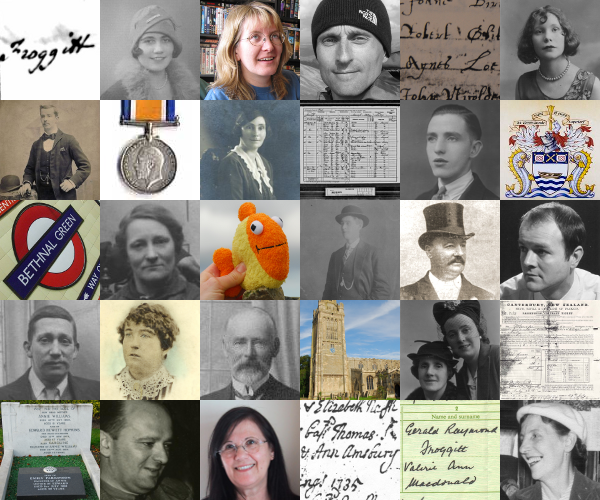 In 1943, Rose Collett, née Froggitt, and her childrenRonald and Doreenwere among the 173 who died in the Bethnal Green tube disaster. This incident was the largest civilian loss during World War II. Ronald was the only survivor of the accident, but died later in hospital.

In another tragedy, 5 members of our family were lost in the sinking of the SS Connemara in Carlingford Lough in 1916.

The Froggitt line is believed to come from the name and village Froggatt, in Derbyshire. We still can't find the link to our London Froggitts, our earliest one is a Richard Froggitt born in 1753.

Many branches of our family come from the industrial heartlands of the country. The mills of Warrington andWigan, the factories of London‘s East End, and the coal fields of Somerset. When the coal fields became exhausted, many of the miners moved to the new coal fields of Pennsylvania. A road called ’Fear Street‘ in Pittston is believed to be named after the Fear family — most likely the preacher Thomas Vernon Fear — who settled there.

If your surname is Afford, then you are almost certainly related to us! The Afford name means ’on the ford‘, and originates in the village of Oundle inNorthamptonshire. We have identified nearly 1,700 Affords, and have managed to connect ourselves to most of them.

Several generations of Hopkins worked on the River Thames, as barge-builders and watermen. Before bridges and roads were established, the watermen provided a taxi service, licenced by royal prerogative in 1510, and continuing until the 1940‘s. After the work dried up, they moved north to work on the Manchester Ship Canal.